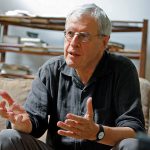 I hope you’ll all join me in celebrating CHARLES SIMIC’S poetry, prose, and life this week.  I’m repeating the post from June 7, 2022, because it’s a good starting point.  What I’m hoping is that everyone who loves his work will join in and post a favorite poem or prose poem here, and best of all bring it to this week’s Fridays at 4 (eastern time) to read to the group.  I’ll be sending the zoom link on Wednesday this week (please let me know if you haven’t received it by Wednesday night, so I can correct that), and I hope you’ll share it with anyone you know who might be interested.  But please don’t post it on any social media–that’s when we get zoom bombers.  His death is a big loss, but we can summon up his presence by reading his work together.

Following up on last week’s post about Polish poet Wisława Szymborska, I want to talk about another Eastern European poet, Charles Simic, who was born in 1939 in what was then Yugoslavia.  I first read his poems in about 1970, when I was just beginning to write seriously, and his work opened doors in my mind that I didn’t even know were there.  That first excitement only deepened over time.  The tone reminds me some of Szymborska’s in its humor in the face of great tragedy.  But Simic’s work also summons up the magic of fairy tales–the impossible described very matter-of-factly.  In addition to his numerous books of poetry, he’s also published several that collect his essays and memoir fragments, which I find as compelling as his poems.  He won the Pulitzer prize in poetry for a collection of prose poems, The World Doesn’t End, which remind me of Joseph Cornell’s boxed assemblages.  Simic wrote an insightful book on Cornell’s work, and I think of Simic’s poems as similar to those boxes.  I’m including here one of the earliest poems of his I read, from Dismantling the Silence, one  about wartime from The Book of Gods and Devils, a prose poem from The World Doesn’t End, and three brief prose passages from his memoirs.

Simic didn’t arrive in this country until he was sixteen.  Why has he always written in English, and not his native Serbian? “For poetry to be used as an instrument of seduction, the first requirement is that it be understood. No American girl was likely to fall for a guy who read her love poems in Serbian as they sipped Coke.”

This strange thing must have crept
Right out of hell.
It resembles a bird’s foot
Worn around the cannibal’s neck.

As you hold it in your hand,
As you stab with it into a piece of meat,
It is possible to imagine the rest of the bird:
Its head which like your fist
Is large, bald, beakless, and blind.

TWO DOGS
for Charles and Holly

An old dog afraid of his own shadow
In some Southern town.
The story told me by a woman going blind,
One fine summer evening
As shadows were creeping
Out of the New Hampshire woods,
A long street with just a worried dog
And a couple of dusty chickens,
And all that sun beating down
In that nameless Southern town.

It made me remember the Germans marching
Past our house in 1944.
The way everybody stood on the sidewalk
Watching them out of the corner of the eye,
The earth trembling, death going by…
A little white dog ran into the street
And got entangled with the soldiers’ feet.
A kick made him fly as if he had wings.
That’s what I keep seeing!
Night coming down. A dog with wings.

One night the Gestapo came to arrest my father.  This time I was asleep and awoke suddenly to the bright lights.  They were rummaging everywhere and making a lot of noise.  My father was already dressed.  He was saying something, probably cracking a joke.  That was his style.  No matter how bleak the situation, he’d find something funny to say.  Years later, surrounded by doctors and nurses after having suffered a bad heart attack, he replied to their “how’re you feeling sir” with a request for some pizza and beer.  The doctors thought he had suffered brain damage.  I had to tell them this was normal behavior for him.

There was an old cemetery nearby [where Simic lived with his pregnant mother in Belgrade during WW II] with a huge church, and beyond it the fairgrounds, where supposedly, they were shooting German prisoners.  We met a pack of children on the way who said that they were from the circus.  It was true.  There used to be a circus tent on the fairgrounds in the early years of the war, but now only a few trailers were left on its edge.  These were odd-looking children.  They wore the strangest clothes–unmatched, wrong-sized costumes–and they jabbered, speaking a foreign language among themselves.
“Show him what you can do,” said my friend, who had met them before.  They obliged.  A little boy stood on his hands.  Then, he removed one hand and was left for a moment standing on the other.  A thin, dark-eyed, dark-haired girl leaned back until her head emerged from between her legs.  “They have no bones,” my friend whispered.  The dead have no bones, I thought.  They fall over like sacks of flour.

All able men were conscripted and the fighting was fierce.  Belgrade was a city of the wounded.  One saw people on crutches on every corner.  They walked slowly, at times carrying a mess kit with their daily ration.  There were soup kitchens in which people got their meals.  Once, chased by a friend, I rounded the corner of my street at top speed and collided with one of these invalids, spilling his soup on the sidewalk..  I won’t forget the look he gave me.  “Oh child,” he said softly.  I was too stunned to speak.  I didn’t even have the sense to pick up his crutch.  I watched him do it himself with great difficulty.

Getting to Know a Poem