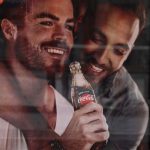 After the intensity of the past few weeks, and given the holidays–solstice, the light coming back, is my personal favorite–I want to talk about poems full of happiness, joy, pleasure.  Not that those are synonyms, mind you.  So many nuances.  As I chose poems I noticed that some of them enact feelings I would call one of those names, while others declare their intentions.  As usual, I came across some I hadn’t seen before–another one of the pleasures (haha) of doing this.  Why do you think it often seems harder to write good poems out of these feelings than out of darker ones?  I’m guessing that it’s easier to resort to clichés with these feelings, and that we treat them as less complex than they actually are.  I’m really looking forward to seeing your own examples and your comments here, and to talking about the poems in this week’s Fridays at 4 (eastern time).

The still explosions on the rocks,
the lichens, grow
by spreading, gray, concentric shocks.
They have arranged
to meet the rings around the moon, although
within our memories they have not changed.

And since the heavens will attend
as long on us,
you’ve been, dear friend,
precipitate and pragmatical;
and look what happens. For Time is
nothing if not amenable.

The shooting stars in your black hair
in bright formation
are flocking where,
so straight, so soon
—Come, let me wash it in this big tin basin,
battered and shiny like the moon

You, rare as Georgia
snow. Falling

The cold
spell that catches

us by surprise.
The too-early blooms,

Nothing stays. I want
to watch you walk

the halls to the cold tile
bathroom—all

Love set you going like a fat gold watch.
The midwife slapped your footsoles, and your bald cry
Took its place among the elements.

Our voices echo, magnifying your arrival. New statue.
In a drafty museum, your nakedness
Shadows our safety. We stand round blankly as walls.

I’m no more your mother
Than the cloud that distills a mirror to reflect its own slow
Effacement at the wind’s hand.

All night your moth-breath
Flickers among the flat pink roses. I wake to listen:
A far sea moves in my ear.

One cry, and I stumble from bed, cow-heavy and floral
In my Victorian nightgown.
Your mouth opens clean as a cat’s. The window square

Whitens and swallows its dull stars. And now you try
Your handful of notes;
The clear vowels rise like balloons.

HAVING A COKE WITH YOU

is even more fun than going to San Sebastian, Irún, Hendaye, Biarritz, Bayonne
or being sick to my stomach on the Travesera de Gracia in Barcelona
partly because in your orange shirt you look like a better happier St. Sebastian
partly because of my love for you, partly because of your love for yoghurt
partly because of the fluorescent orange tulips around the birches
partly because of the secrecy our smiles take on before people and statuary
it is hard to believe when I’m with you that there can be anything as still
as solemn as unpleasantly definitive as statuary when right in front of it
in the warm New York 4 o’clock light we are drifting back and forth
between each other like a tree breathing through its spectacles

and the portrait show seems to have no faces in it at all, just paint
you suddenly wonder why in the world anyone ever did them
I look
at you and I would rather look at you than all the portraits in the world
except possibly for the Polish Rider occasionally and anyway it’s in the Frick
which thank heavens you haven’t gone to yet so we can go together for the first time
and the fact that you move so beautifully more or less takes care of Futurism
just as at home I never think of the Nude Descending a Staircase or
at a rehearsal a single drawing of Leonardo or Michelangelo that used to wow me
and what good does all the research of the Impressionists do them
when they never got the right person to stand near the tree when the sun sank
or for that matter Marino Marini when he didn’t pick the rider as carefully
as the horse
it seems they were all cheated of some marvelous experience
which is not going to go wasted on me which is why I’m telling you about it

There’s just no accounting for happiness,
or the way it turns up like a prodigal
who comes back to the dust at your feet
having squandered a fortune far away.

And how can you not forgive?
You make a feast in honor of what
was lost, and take from its place the finest
garment, which you saved for an occasion
you could not imagine, and you weep night and day
to know that you were not abandoned,
that happiness saved its most extreme form
for you alone.

No, happiness is the uncle you never
knew about, who flies a single-engine plane
onto the grassy landing strip, hitchhikes
into town, and inquires at every door
until he finds you asleep midafternoon
as you so often are during the unmerciful
hours of your despair.

It comes to the monk in his cell.
It comes to the woman sweeping the street
with a birch broom, to the child
whose mother has passed out from drink.
It comes to the lover, to the dog chewing
a sock, to the pusher, to the basket maker,
and to the clerk stacking cans of carrots
in the night.
It even comes to the boulder
in the perpetual shade of pine barrens,
to rain falling on the open sea,
to the wineglass, weary of holding wine.

So early it’s still almost dark out.
I’m near the window with coffee,
and the usual early morning stuff
that passes for thought.

When I see the boy and his friend
walking up the road
to deliver the newspaper.

They wear caps and sweaters,
and one boy has a bag over his shoulder.
They are so happy
they aren’t saying anything, these boys.

I think if they could, they would take
each other’s arm.
It’s early in the morning,
and they are doing this thing together.

They come on, slowly.
The sky is taking on light,
though the moon still hangs pale over the water.

Such beauty that for a minute
death and ambition, even love,
doesn’t enter into this.

Happiness. It comes on
unexpectedly. And goes beyond, really,
any early morning talk about it.

ANOTHER OF THE HAPPINESS POEMS

It’s not that we’re not dying.
Everything is dying.
We hear these rumors of the planet’s end
none of us will be around to watch.

It’s not that we’re not ugly.
We’re ugly.
Look at your feet, now that your shoes are off.
You could be a duck,

no, duck-billed platypus,
your feet distraction from your ugly nose.
It’s not that we’re not traveling,
we’re traveling.

But it’s not the broadback Mediterranean
carrying us against the world’s current.
It’s the imagined sea, imagined street,
the winged breakers, the waters we confuse with sky

willingly, so someone out there asks
are you flying or swimming?
That someone envies mortal happiness
like everyone on the other side, the dead

who stand in watch, who would give up their bliss,
their low tide eternity rippleless
for one day back here, alive again with us.
They know the sea and sky I’m walking on

or swimming, flying, they know it’s none of these,
this dancing-standing-still, this turning, turning,
these constant transformations of the wind
I can bring down by singing to myself,

the newborn mornings, these continuals—

It is difficult to know what to do with so much happiness.
With sadness there is something to rub against,
a wound to tend with lotion and cloth.
When the world falls in around you, you have pieces to pick up,
something to hold in your hands, like ticket stubs or change.
But happiness floats.
It doesn’t need you to hold it down.
It doesn’t need anything.
Happiness lands on the roof of the next house, singing,
and disappears when it wants to.
You are happy either way.
Even the fact that you once lived in a peaceful tree house
and now live over a quarry of noise and dust
cannot make you unhappy.
Everything has a life of its own,
it too could wake up filled with possibilities
of coffee cake and ripe peaches,
and love even the floor which needs to be swept,
the soiled linens and scratched records…..
Since there is no place large enough
to contain so much happiness,
you shrug, you raise your hands, and it flows out of you
into everything you touch. You are not responsible.
You take no credit, as the night sky takes no credit
for the moon, but continues to hold it, and share it,
and in that way, be known.

I’ve been eating
like a sultan
since I was two days old.

I had a mother
and three sisters
who worshipped me.

satin pillows
and spray me
with exotic perfumes

and lilac water,
and then
they would shoot me the grapes.