The Sublime in Poetry 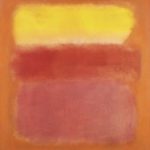 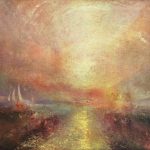 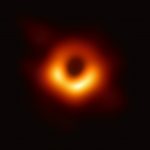 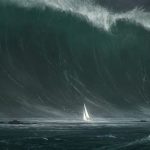 I think this is the concept we’ve been circling in recent discussions of silence in poems, fragments, and immensities in time and space.  Here are some of the associated words and phrases that come to mind: awesome, terrifying, engulfing, infinite, transcendent, beyond our understanding, beyond words, ecstasy, the invisible, the uncanny.

The origin of the concept in western tradition is usually traced to a first century work On the Sublime, by Longinus,  who defined it as “the echo of greatness of spirit” in the creator of the art, rather than in a balance of technical elements in the writing. He offers examples from Homer, and, for the intensity of the emotions described, Sappho’s ode (fragment #31) about her longing for a woman she loves who’s with a man.

“Echo” is a crucial word here–the sublime refers to the human response to an event or encounter, not the event itself.  Sublime doesn’t describe the landscape Turner painted, but his response to it–and in turn the viewer’s.

In western literature, the sublime is most associated with the Romantic poets, including Blake, Byron, Shelley, Keats, Wordsworth, and Coleridge, among others.  Wordsworth described it as “The mind trying to grasp at something towards which it can make approaches but which it is incapable of reaching.”

Many of my own experiences of the sublime have happened when I was listening to music, from Glenn Gould playing Bach to the Budapest Quartet playing Beethoven to k.d. lang’s rendition of Leonard Cohen’s “Hallelujah.”  Or when I was on the edge of the land, facing the ocean,  or surrounded by stars in the desert.  Looking at Jackson Pollock’s paintings, or Mark Rothko’s.  In his book Mark Rothko: from the Inside Out, his son Christopher Rothko says, “The classic works…articulate the language of the sublime….They are essentially the painted expression of what it is to be human and alive….”

And of course I find it in poetry.  I’ve included a few examples here that I’d consider examples of the sublime.  I’ll be very interested to hear about your own experiences of it in different situations, and especially to see poems that make you feel it.

I found this Helen Vendler talk, Emily Dickinson and the Sublime, illuminating.

The images above, left to right: paintings by Mark Rothko and JMW Turner, first photo of a black hole, ocean wave and sailboat.

WHEN I HAVE FEARS

When I have fears that I may cease to be
Before my pen has gleaned my teeming brain,
Before high-piled books, in charactery
Hold like rich garners the full ripened grain,
When I behold upon the night’s starr’d face
Huge cloudy symbols of a high romance,
And think that I may never live to trace
Their shadows with the magic hand of chance,
And when I feel, fair creature of an hour,
That I may never live to see thee more,
Never have relish in the faerie power
Of unreflecting Love–then on the shore
Of the wide world I stand alone and think,
`Til Love and Fame to nothingness do sink.

Snow falling and night falling fast, oh, fast
In a field I looked into going past,
And the ground almost covered smooth in snow,
But a few weeds and stubble showing last.

The woods around it have it–it is theirs.
All animals are smothered in their lairs.
I am too absent-spirited to count;
The loneliness includes me unawares.

And lonely as it is that loneliness
Will be more lonely ere it will be less–
A blanker whiteness of benighted snow
With no expression, nothing to express.

They cannot scare me with their empty spaces
Between stars–on stars where no human race is.
I have it in me so much nearer home
To scare myself with my own desert places.

THE IDEA OF ORDER AT KEY WEST

She sang beyond the genius of the sea.
The water never formed to mind or voice,
Like a body wholly body, fluttering
Its empty sleeves; and yet its mimic motion
Made constant cry, caused constantly a cry,
That was not ours although we understood,
Inhuman, of the veritable ocean.

The sea was not a mask. No more was she.
The song and water were not medleyed sound
Even if what she sang was what she heard,
Since what she sang was uttered word by word.
It may be that in all her phrases stirred
The grinding water and the gasping wind;
But it was she and not the sea we heard.

For she was the maker of the song she sang.
The ever-hooded, tragic-gestured sea
Was merely a place by which she walked to sing.
Whose spirit is this? we said, because we knew
It was the spirit that we sought and knew
That we should ask this often as she sang.

If it was only the dark voice of the sea
That rose, or even colored by many waves;
If it was only the outer voice of sky
And cloud, of the sunken coral water-walled,
However clear, it would have been deep air,
The heaving speech of air, a summer sound
Repeated in a summer without end
And sound alone. But it was more than that,
More even than her voice, and ours, among
The meaningless plungings of water and the wind,
Theatrical distances, bronze shadows heaped
On high horizons, mountainous atmospheres
Of sky and sea.

It was her voice that made
The sky acutest at its vanishing.
She measured to the hour its solitude.
She was the single artificer of the world
In which she sang. And when she sang, the sea,
Whatever self it had, became the self
That was her song, for she was the maker. Then we,
As we beheld her striding there alone,
Knew that there never was a world for her
Except the one she sang and, singing, made.

Ramon Fernandez, tell me, if you know,
Why, when the singing ended and we turned
Toward the town, tell why the glassy lights,
The lights in the fishing boats at anchor there,
As the night descended, tilting in the air,
Mastered the night and portioned out the sea,
Fixing emblazoned zones and fiery poles,
Arranging, deepening, enchanting night.

Oh! Blessed rage for order, pale Ramon,
The maker’s rage to order words of the sea,
Words of the fragrant portals, dimly-starred,
And of ourselves and of our origins,
In ghostlier demarcations, keener sounds.

FOR THE ANNIVERSARY OF MY DEATH

A DRINK FROM CRANMERE POOL

to this weephole
where you can taste
almost
not water exactly

More on the Sublime