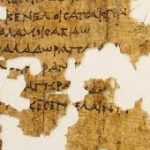 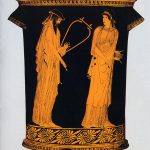 Our recent discussions of silences in poetry brought to mind Anne Carson’s If Not, Winter, her 2002 translation of 189 Sappho fragments, with the Greek on facing pages.  What most struck me when I opened it the first time was all the white space–most pages are white with a sprinkling of brackets and a few words.  I was surprised at first, because other versions I’d read filled in the blanks.  But almost immediately Carson’s translations–which look like lace on the page in imitation of the papyrus fragments–felt more compelling, more accurate in their rendering of what’s been lost as well as the little that’s left.   According to Anne Carson’s introduction, Sappho lived in Mytilene on the island of Lesbos from about 630 bc on.  She describes her first as a musician–a prolific musician.  But none of her music survived.  She was also a poet.  Carson: “Of the nine books of lyrics that Sappho is said to have composed, one poem has survived complete.  All the rest are fragments.”

I didn’t know that when I first read her work in translation, in Mary Barnard’s versions.  I loved them at the time, and also some other versions I read over the years–single poems or a few, nothing complete.  As soon as I began to read Carson’s, I was shocked by how much those other versions (I wouldn’t call them translations anymore) made out of so little.  In many cases the originals seem to have been treated more as writing prompts than as fragments of powerful poems on their own–they seem presumptuous to me now, however well written they might be as poems of their own. In Carson’s versions, I can feel the time that has passed since Sappho wrote them, eating away.  The words that are there arrive over all that distance, and I feel enormous gratitude that they traveled so far to reach me–almost like light from a dead star.  The emptiness reminds me as I read how much of the context has been lost, and cautions me against treating them as if they were contemporary.

My sense of the great distance only grew as I turned to a book by Margaret Reynolds, The Sappho Companion, which immediately strips away layer after layer of the false intimacy that puts images labeled “Sappho” on coffee mugs and calendars.  To begin with, the name we pronounce softly, almost in a whisper, Saffo, would have originally been pronounced  more like psappho, full of p‘s “spitting and popping.”  We know very little about her life, beyond tiny hints in the fragments and later stories about her.  Most of us are reading the fragments in English, not Greek, another step removed.  And back beyond that, even those who can read the precious fragments  aren’t face to face with Sappho.  Her poetry was oral, and first written down from handed on memory roughly two hundred years after her death.  That’s how wispy the connection is.  As Reynolds says: “‘Sappho'” is not a name, much less a person.  It is, rather, a space.  A space for filling in the gaps, joining up the dots, making something out of nothing.”

And yet, somehow, the few words speak to us, as they did to those who first wrote them down.  How is that?  This week I’d like to talk about the silences, and then next week compare some translations.

Please post your own thoughts about the silences and about translating.  And if you want to try filling in any of the blanks, post that too.  I’m looking forward to our Fridays at 4 (eastern time) discussion.

from Anne Carson, If Not, Winter: Fragments of Sappho

] for when I look at you

] and to yellowhaired Helen I liken you

] among mortal women, know this

] you could release me

] to last all night long

the one with violets in her lap

] would be for me

] to shine in answer

I treat well are the ones who most of all

on the black earth.  But I say it is

Easy to make this understood by all.

For she who overcame everyone

behind and went sailing to Troy.

Not for her children nor her dear parents

had she a thought, no–

] reminded me now of Anaktoria

I would rather see her lovely step

and the motion of light on her face

than the chariots of Lydians or ranks

of footsoldiers in arms.

]not possible to happen

out of the unexpected

as the sweetapple reddens on a high branch

high on the highest branch and the applepickers forgot–

no, not forgot: you were unable to reach

like the hyacinth in the mountains that shepherd men

You: an Achilles’ apple

Blushing sweet on a high branch

At the tip of the tallest tree.

You escaped those who would pluck your fruit.

Not that they didn’t try.  No,

They could not forget you

Poised beyond their reach.

What shepherds trod upon you

Now you are a broken seal:

A scarlet stain upon the earth.