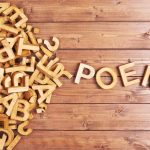 Since last week’s audience participation with translation worked so well, I thought I’d try another interactive post.  This time I want to look at the order of poems as they unfold and reveal themselves. The examples that follow are all published poems that might or might not be in their original order.  For those that are only three stanzas, I think you could try all six possibilities (poet’s math, correct me if I’m wrong) to see which you prefer.  For the five-stanza poem, there are many more (again, poet’s math) possibilities, and for longer than that….

Post your thoughts here–your order, and any comments you want to add–by Thursday, so that we’ll all have a chance to read them before this week’s Fridays at 4 (eastern time) discussion.  The point is to see how a poem’s meaning and impact can be changed simply by changing the order of the stanzas.  You might also come up with your own titles, since I haven’t included them.

Then the keeper threw a stick
And the dog went after it
On four legs, the other two flapping behind,
Which made one girl shriek with laughter.

She was drunk and so was the man
Who kept kissing her neck.
The dog got the stick and looked back at us
And that was the whole show.

If you didn’t see the six-legged dog,
It doesn’t matter.
We did, and he mostly lay in the corner.
As for the extra legs,

One got used to them quickly
And thought of other things.
Like, what a cold, dark night
To be out at the fair.

Let it come as it will, and don’t
be afraid.  God does not leave us
comfortless, so let evening come.

To the bottle in the ditch, to the scoop
in the oats, to the air in the lung
let evening come.

Let the dew collect on the hoe abandoned
in long grass.  Let the stars appear
and the moon disclose her silver horn.

Let the fox go back to its sandy den.
Let the wind die down.  Let the shed
go black inside.  Let evening come.

Let the cricket take up chafing
as a woman takes up her needles
and her yarn.  Let evening come.

Let the light of late afternoon
shine through chinks in the barn, moving
up the bales as the sun moves down.

The sleep of wind has been known to fill the sky.
The long sleep of air locked in the lungs of the dead.
The sleep of a room with someone inside it.
Even the wooden sleep of the moon is possible.

There is the sleep of my tongue
speaking a language I can never remember–
words that enter the sleep of words
once they are spoken.

The man who stands down at the dock screws up his eyes against the water.
Docks get old faster than men.
They have silver-gray posts and boulders in their gut.
The dazzling light drives straight in.

The man who spends the whole day in an open boat
moving over the luminous bays
will fall asleep at last inside the shade of his blue lamp
as the islands crawl like huge moths over the globe.

The man who lies on his back under huge trees
is also up in them.  He branches out into thousands of tiny branches.
He sways back and forth,
he sits in a catapult chair that hurtles forward in slow motion.

One soft foot at a time,
She climbed on my chest,
Looked through the blank
Lid of my face, made
The faintest cry, then
Curled over my heart
And slept, so that I could,
For three nights in a row–
Visitations like belief,
Unreal, against all odds.

Back home at last
After seeing my mother
Lowered into frozen earth,
I couldn’t find sleep
With wine or even pills,
When our calico, as if
Called, came to the sofa
And did something
Never repeated since–

When I forget to weep,
I hear the peeping tree toads
creeping up the bark.
Love lies asleep
and dreams that everything
is in its golden net;
and I am caught there, too,
when I forget.

When I am sad
I sing, remembering
the redwing blackbird’s clack.
Then I want no thing
except to turn time back
to what I had
before love made me sad.