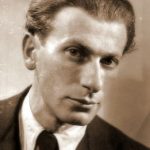 Last week someone asked about translating poetry, and in particular about translating from a language you don’t know.  So I’ve decided to give you a chance to see what that feels like.  I chose a poem by the Hungarian poet Miklós Radnóti, assuming that most of you aren’t fluent in Hungarian–referred to by more than one commentator as “the devil’s language,” for its difficulty.  Its nearest living relative is Finnish–not exactly a close cousin.  But a native Hungarian speaker told me that when she was in Finland once she could hear, from a distance, some vaguely familiar cadences.

Of course you could search for a translation online, but that would defeat the whole purpose.  Feel free to try a translation program to give you an approximation, and then work on turning it into a compelling musical poem in English.  Read about Radnóti, and anything else you think might help you build your own translation–listen to some Hungarian online, maybe.  Please post your version in Comments no later than Thursday so that we have a chance to look at them ahead of our Fridays at 4 (eastern time) discussion.  Let me know if you have any questions.

Please note that the second U in EGÜGYÚ and the Ó  IN FELESÉGRÓL should have two similar accents, not one, but my keyboard doesn’t have that symbol.  The same is true for two o’s in the poem.  The single accents in his name are correct (see what I mean about the devil’s language?).

The Consolations of Music