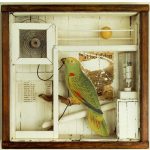 Beginning in the late 19th century, poets began to give up some of their defining tools on the way to creating new kinds of poems that better reflected current life.  First, they gave up rhyme, but still drew on all the other familiar elements of poetry.  Then they gave up meter–a much more drastic change–but found other ways to create musical free verse.  Even then the distinction between poetry and prose was still clear: prose goes all the way across the page, and where one line ends and the next begins is determined by the printer and the page size; lines of poetry don’t cross the entire page, and the poet determines where each one ends.  But then some 19th century French poets, beginning with Baudelaire, began to give up even line and line break, and still call what they wrote poems–prose poems.  A prose poem is a form, like a sonnet or villanelle, but it can be hard to define.  With so many tools of poetry eliminated, the image became even more important.  Compression is another crucial tool that distinguishes a prose poem from prose–entire stories, worlds, universes are contained in a paragraph or two. They range in length from a few sentences to a page or more, but I prefer the shorter ones, like those by Charles Simic, James Tate, Robert Bly, Michael Benedikt, Bill Knott, Mary Ruefle, Kathleen McGookey, and many others.  Charles Simic has written a book about artist Joseph Cornell’s boxes (one is pictured above), and ever since I read it I’ve thought of prose poems as similar to those boxes–assemblages of different objects arranged in a frame.

Russell Edson, who began publishing them in the 1960s, is a central figure in bringing prose poems into American poetry, and in 1977 Michael Benedikt edited An International Anthology of the Prose Poem, that was published in 1977.  Ever since then prose poems have been an important genre in American poetry.  You can find more information and an excellent description by poet Ed Hirsch of what prose poems are on this Academy of American Poets page.

As always, I’m looking forward to seeing your comments and favorites, and to talking with you at this week’s Fridays at 4 (eastern time).

Let us consider the farmer who makes his straw hat his
sweetheart; or the old woman who makes a floor lamp her son;
or the young woman who has set herself the task of scraping
her shadow off a wall….

Let us consider the old woman who wore smoked cows’
tongues for shoes and walked a meadow gathering cow chips
in her apron; or a mirror grown dark with age that was given
to a blind man who spent his nights looking into it, which
saddened his mother, that her son should be so lost in
vanity….

Let us consider the man who fried roses for his dinner,
whose kitchen smelled like a burning rose garden; or the man
who disguised himself as a moth and ate his overcoat, and for
dessert served himself a chilled fedora….

Once upon a time there was a bird, my God.
—Clarice Lispector

I am the yellow finch that came to her feeder an hour before she died. I was the last living thing she saw, so my responsibility was great. Yet all I did was eat. Through eight long months of winter the black oiled sunflower seeds had gone untouched—not a single one of my kind or any other kind had approached them. It was too much work. Even if we’d had the strength—which we did not, half-starved as we were—we were not in the mood to crack anything. On the morning of the twenty-second of April she took them away and refilled the feeding tube with sunflower hearts—sheeny niblets whose hard outer husk had been stripped away by some faraway, intricate machine. She went back inside and waited. From my branch I could see her do the things she liked to do—she picked up a towel from off the floor, she filled out a card stopping the mail, she boiled water, she stared into space. She saw me coming. Her face flickered with, if not exactly joy, the ordinary wellspring of life. It’s true there was a sheet of glass between us. But I could see the seeds of her eyes and the upturned corners of her mouth. I ate a heart. I turned my head. She looked at me as if I were the last living thing on earth. And as I was, I kept on eating.

Soft stockings coddle them by day and nail-bossed leather shoes buttress them, but my toes refuse to pay attention. Nothing interests them but emitting toenails, horny plates, semi-transparent and elastic, to defend themselves–from whom? Stupid and mistrustful as they alone can be, they never for a moment stop readying that tenuous armament. They reject the universe and its ecstasy to keep forever elaborating sharp ends, which rude Solingen scissors snip over and over again. Ninety days along in the dawn of prenatal confinement, they establish that singular industry. When I am laid away, in an ash-colored house provided with dead flowers and amulets, they will still go on with their stubborn task, until they are moderated by decay. They–and the beard on my face.

My mother was a braid of black smoke.
She bore me swaddled over the burning cities.
The sky was a vast and windy place for a child to play.
We met many others who were just like us.
They were trying to put on their overcoats with
arms made of smoke.The high heavens were full of little shrunken
deaf ears instead of stars.

They wheeled out the ash blonde who believes
herself already dead into the spike-fence garden of
the insane.  Her name was Amy or
Ann, but she didn’t answer to either one.  She kept
her eyes tightly shut.  She was pushed by a nurse in white.
Some of it was told to me by a shivering young
man who insisted that it’s been raining for years,
even indoors.  “Coming down real hard,” he said.

My guardian angel is afraid of the dark.  He
pretends he’s not, sends me ahead, tells me he’ll be
along in a moment.  Pretty soon I can’t see a thing.
“This must be the darkest corner of heaven,” some-
one whispers behind y back.  It turns out her
guardian angel is missing too.  “It’s an outrage,”
I tell her.  ‘The dirty little cowards leaving us all
alone,” she whispers.  And of course, for all we
know, I might be a hundred years old already, and
she just a sleepy little girl with glasses.

The Sublime in Poetry

Poems You Have Questions About