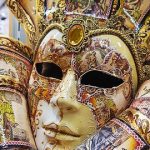 Even though persona is just one letter short of personal, its original Latin means almost the opposite: theatrical mask.  In more recent literature it refers to dramatic monologues like Browning’s “My Last Duchess” and T. S. Eliot’s The Love Song of J. Alfred Prufrock.  In a wider sense, persona refers to someone’s role in public, as distinguished from their inner, private self.  In contemporary poetry, persona usually refers to a speaker who is distinctly different from the writer.  But I would argue that almost all poetry is persona poetry, since even an I speaker who has a lot in common with the writer is a construct on the page–a public role.  The only exception might be confessional poetry, which at least gives the appearance of conflating the speaker with the writer.

Most personas speak directly in first person, but some are characters spoken about–avatars for the self, or distinctly others.  Persona poems always have a duality: the mask, and the person wearing the mask, speaking through it.  It’s a powerful device, one that can free a writer to speak in a voice very different from his or her own, and to take on different attitudes, to see the world from a different angle.  And the self is also seen at an angle, indirectly–“Tell the truth, but tell it slant,” as Dickinson said.

I thought of many poems I couldn’t include here, like Marvin Bell’s Dead Man poems (too long, and impossible to format here), Eliot’s Prufrock, Pound’s Personae.  I’d recommend poems from Adrian Matejka’s book The Big Smoke, about the first black heavy-weight champion, Jack Johnson; many of Richard Howard’s poems; Frank Bidart’s “Herbert White” and “Ellen West”; Robert Hayden’s “Night, Death, Mississippi,” where the poem’s speaker is a Klansman.  And I highly recommend reading all six sections of Mona Van Duyn’s “Letters from a Father,” that charts the gradual transformation in her parents’ lives after she gives them a bird feeder.

As usual, I’ll send the Fridays at 4 (eastern time) zoom link at the end of the week.

This is the one song everyone
would like to learn: the song
that is irresistible:

the song nobody knows
because anyone who has heard it
is dead, and the others can’t remember.

Shall I tell you the secret
and if I do, will you get me
out of this bird suit?

with these two feathery maniacs,
I don’t enjoy singing
this trio, fatal and valuable.

I will tell the secret to you,
to you, only to you.
Come closer. This song

is a cry for help: Help me!
Only you, only you can,
you are unique

at last. Alas
it is a boring song
but it works every time.

white folks say i remind them
of home i who have been homeless
all my life except for their
kitchen cabinets.

excerpts from LETTERS FROM A FATHER

We enjoyed your visit, it was nice of you to bring
the feeder but a terrible waste of your money
for that big bag of feed since we won’t be living
more than a few weeks long.  We can see
them good from where we sit, big ones and little ones
but you know when I farmed I used to like to hunt
and we had many a good meal from pigeons
and quail and pheasant but these birds won’t
be good for nothing and are dirty to have so near
the house.  Mother likes the redbirds though.
My bad knee is so sore and I can’t hardly hear
and Mother says she is hoarse from yelling but I know
it’s too late for a hearing aid.  I belch up all the time
and have a sour mouth and of course with my heart
it’s no use to go to a doctor.  Mother is the same.
Has a scab she thinks is going to turn to a wart.

The birds are eating and fighting, Ha! Ha!  All shapes
and colors and sizes coming out of our woods
but we don’t know what they are.  Your Mother hopes
you can send us a kind of book that tells about birds.
There is one the folks called snowbirds, they eat on the ground,
we had the girl sprinkle extra there, but say,
they eat something awful.  I sent the girl to town
to buy some more feed, she had to go anyway.

It’s sure a surprise how well Mother is doing,
she forgets her laxative but bowels move fine.
Now that windows are open she says our birds sing
all day.  The girl took a Book of Knowledge on loan
from the library and I am reading up
on the habits of birds, did you know some males have three
wives, some migrate some don’t.  I am going to keep
feeding all spring, maybe summer, you can see
they expect it.  Will need thistle seed for Goldfinch and Pine
Siskin next winter.  Some folks are going to come see us
from Church, some bird watchers, pretty soon.
They have birds in town but nothing to equal this.

So the world woos its children back for an evening kiss.

There sat down, once, a thing on Henry’s heart
só heavy, if he had a hundred years
& more, & weeping, sleepless, in all them time
Henry could not make good.
Starts again always in Henry’s ears
the little cough somewhere, an odour, a chime.

And there is another thing he has in mind
like a grave Sienese face a thousand years
would fail to blur the still profiled reproach of.  Ghastly,
with open eyes, he attends, blind.
All the bells say: too late.  This is not for tears;
thinking.

But never did Henry, as he thought he did,
end anyone and hacks her body up
and hide the pieces, where they may be found.
He knows: he went over everyone, & nobody’s missing.
Often he reckons, in the dawn, them up.
Nobody is ever missing.

Zbigniew Herbert  (trans. from the Polish by John and Bogdana Carpenter)