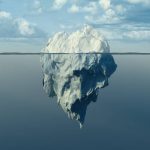 You will all know why I chose these poems–let’s see how far our imaginations carry us away from the heat.  I thought of many obvious ones at first, but chose less familiar ones hoping their freshness will be more compelling.  Once you’ve read them for their chilling effect, go back and look at how they’re put together: beginnings, endings, how they travel from one to the other, point of view, verb tense.  Also notice the images, especially similes, because I think that will be coming up soon.  Please comment here and add any of your own.  I hope they help.

Fridays at 4 (eastern time) will be taking a brief break this week.  See you next week.

Once with my scarf knotted over my mouth
I lumbered into a storm of snow up the long hill
and did not know where I was going except to the top of it.
In those days we went out like that.
Even children went out like that.
Someone was crying hard at home again,
raging blizzard of sobs.

I dragged the sled by its rope,
which we normally did not do
when snow was coming down so hard,
pulling my brother whom I called by our secret name
as if we could be other people under the skin.
The snow bit into my face, prickling the rim
of the head where the hair starts coming out.
And it was a big one. It would come down and down
for days. People would dig their cars out like potatoes.

How are you doing back there? I shouted,
and he said Fine, I’m doing fine,
in the sunniest voice he could muster
and I think I should love him more today
for having used it.

At the top we turned and he slid down,
steering himself with the rope gripped in
his mittened hands. I stumbled behind
sinking deeply, shouting Ho! Look at him go!
as if we were having a good time.
Alone on the hill. That was the deepest
I ever went into the snow. Now I think of it
when I stare at paper or into silences
between human beings. The drifting
accumulation. A father goes months
without speaking to his son.

How there can be a place
so cold any movement saves you.

Ho! You bang your hands together,
stomp your feet.  The father could die!
The son! Before the weather changes.

Tell yourself
as it gets cold and gray falls from the air
that you will go on
walking, hearing
the same tune no matter where
you find yourself—
inside the dome of dark
or under the cracking white
of the moon’s gaze in a valley of snow.
Tonight as it gets cold
tell yourself
what you know which is nothing
but the tune your bones play
as you keep going. And you will be able
for once to lie down under the small fire
of winter stars.
And if it happens that you cannot
go on or turn back
and you find yourself
where you will be at the end,
tell yourself
in that final flowing of cold through your limbs
that you love what you are.

As the stores close, a winter light
opens air to iris blue,
glint of frost through the smoke
grains of mica, salt of the sidewalk.

As the buildings close, released autonomous
feet pattern the streets
in hurry and stroll; balloon heads
drift and dive above them; the bodies
aren’t really there.

As the lights brighten, as the sky darkens,
a woman with crooked heels says to another woman
while they step along at a fair pace,
“You know, I’m telling you, what I love best
is life. I love life! Even if I ever get
to be old and wheezy—or limp! You know?

To the multiple disordered tones
of gears changing, a dance
to the compass points, out, four-way river.
Prospect of sky
wedged into avenues, left at the ends of streets,
west sky, east sky: more life tonight! A range
of open time at winter’s outskirts.

Lambs that learn to walk in snow
When their bleating clouds the air
Meet a vast unwelcome, know
Nothing but a sunless glare.
Newly stumbling to and fro
All they find, outside the fold,
Is a wretched width of cold.

As they wait beside the ewe,
Her fleeces wetly caked, there lies
Hidden round them, waiting too,
Earth’s immeasureable surprise.
They could not grasp it if they knew,
What so soon will wake and grow
Utterly unlike the snow.

THE SNOWFALL IS SO SILENT

The snowfall is so silent,
so slow,
bit by bit, with delicacy
it settles down on the earth
and covers over the fields.
The silent snow comes down
white and weightless;
snowfall makes no noise,
falls as forgetting falls,
flake after flake.
It covers the fields gently
while frost attacks them
with its sudden flashes of white;
covers everything with its pure
and silent covering;
not one thing on the ground
anywhere escapes it.
And wherever it falls it stays,
content and gay,
for snow does not slip off
as rain does,
but it stays and sinks in.
The flakes are skyflowers,
pale lilies from the clouds,
that wither on earth.
They come down blossoming
but then so quickly
they are gone;
they bloom only on the peak,
above the mountains,
and make the earth feel heavier
when they die inside.
Snow, delicate snow,
that falls with such lightness
on the head,
on the feelings,
come and cover over the sadness
that lies always in my reason.

We’d rather have the iceberg than the ship,
although it meant the end of travel.
Although it stood stock-still like cloudy
rock and all the sea were moving marble.
We’d rather have the iceberg than the ship;
we’d rather own this breathing plain of snow
though the ship’s sails were laid upon the sea
as the snow lies undissolved upon the water.
O solemn, floating field,
are you aware an iceberg takes repose
with you, and when it wakes may pasture on your snows?

This is a scene a sailor’d give his eyes for.
The ship’s ignored. The iceberg rises
and sinks again; its glassy pinnacles
correct elliptics in the sky.
This is a scene where he who treads the boards
is artlessly rhetorical. The curtain
is light enough to rise on finest ropes
that airy twists of snow provide.
The wits of these white peaks
spar with the sun.
Its weight the iceberg dares
upon a shifting stage and stands and stares.

This iceberg cuts its facets from within.
Like jewelry from a grave
it saves itself perpetually and adorns
only itself, perhaps the snows
which so surprise us lying on the sea.
Good-bye, we say, good-bye, the ship steers off
where waves give in to one another’s waves
and clouds run in a warmer sky.
Icebergs behoove the soul
(both being self-made from elements least visible)
to see them so: fleshed, fair, erected indivisible.