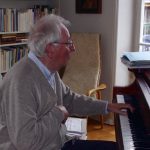 One of the most interesting things in poems is how they travel from one place to the next–from beginning to end, and all the twists and turns along the way.  What are the transitions–some subtle, some obvious–from one thought to the next, one image to the next, one emotion to the next?  We say that poems transport us–they take us somewhere.  We enter with the title and first line, move through the world of the poem, and are shown out at the end.  What was that ride like?  Where did it speed up and slow down? What would a map look like?

Thinking of transportation reminded me of one of the most magical versions I know: the cat-bus in Hayao Miyazaki’s animated movie My Neighbor Totoro.  This was my introduction to his films, and I think I’ve watched almost all of them now, including his best known, Spirited Away.  Reading some poems can be like getting onto the cat-bus.  Here’s a link to the cat-bus arriving to pick up passengers.

So how would you describe the transitions in the poems below?  Post your thoughts here, and plan to join us for this week’s Fridays at 4 (eastern time) discussion.  I’ll send the zoom link later this week.

I wake to sleep, and take my waking slow.
I feel my fate in what I cannot fear.
I learn by going where I have to go.

We think by feeling. What is there to know?
I hear my being dance from ear to ear.
I wake to sleep, and take my waking slow.

Of those so close beside me, which are you?
God bless the Ground!   I shall walk softly there,
And learn by going where I have to go.

Light takes the Tree; but who can tell us how?
The lowly worm climbs up a winding stair;
I wake to sleep, and take my waking slow.

Great Nature has another thing to do
To you and me; so take the lively air,
And, lovely, learn by going where to go.

This shaking keeps me steady. I should know.
What falls away is always. And is near.
I wake to sleep, and take my waking slow.
I learn by going where I have to go.

wade
through black jade.
Of the crow-blue mussel-shells, one keeps
adjusting the ash-heaps;
opening and shutting itself like

an
injured fan.
The barnacles which encrust the side
of the wave, cannot hide
there for the submerged shafts of the

sun,
split like spun
glass, move themselves with spotlight swiftness
into the crevices—
in and out, illuminating

the
turquoise sea
of bodies. The water drives a wedge
of iron through the iron edge
of the cliff; whereupon the stars,

pink
rice-grains, ink-
bespattered jelly fish, crabs like green
lilies, and submarine
toadstools, slide each on the other.

ac-
cident—lack
of cornice, dynamite grooves, burns, and
hatchet strokes, these things stand
out on it; the chasm-side is

dead.
Repeated
evidence has proved that it can live
on what can not revive
its youth. The sea grows old in it.

Tomas Tranströmer   (translated from the Swedish by Robert Bly)

After a black day, I play Haydn,
and feel a little warmth in my hands.

The keys are ready. Kind hammers fall.
The sound is spirited, green, and full of silence.

The sound says that freedom exists
and someone pays no tax to Caesar.

I shove my hands in my haydnpockets
and act like a man who is calm about it all.

I raise my haydnflag. The signal is:
“We do not surrender. But want peace.”

The music is a house of glass standing on a slope;
rocks are flying, rocks are rolling.

The rocks roll straight through the house
but every pane of glass is still whole.

My brother has a knife in his hand.
He has decided to stab my father.

This could be a story from the Bible,
if it wasn’t already a story about stars.

I weep alacranes—the scorpions clatter
to the floor like yellow metallic scissors.

They land upside down on their backs and eyes,
but writhe and flip to their segmented bellies.

My brother has forgotten to wear shoes again.
My scorpions circle him, whip at his heels.

In them is what stings in me –
it brings my brother to the ground.

He rises, still holding the knife.
My father ran out of the house,

down the street, crying like a lamplighter –
but nobody turned their lights on. It is dark.

My brother now wants to give me the knife.
Some might say, My brother wants to stab me.

He tries to pass it to me – like it is a good thing.
Like, Don’t you want a little light in your belly?

Like the way Orion and Scorpius –
across all that black night – pass the sun.

My brother loosens his mouth –
between his teeth, throbbing red Antares.

One way to open a body to the stars, with a knife.
One way to love a sister, help her bleed light.