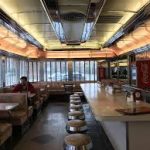 Continuing our discussion of Shape and Structure in poems, I want to look at first lines this week. So much depends upon them: the poem’s voice and tone, its point of view, maybe its verb tense.  The title provides a clue about what we’ll encounter, but often the meaning of it isn’t clear until we’ve read and re-read the poem.  But the opening line is a momentous threshold we cross, from our world into the poem’s world.  It might be a small step, or a plunge:  “Whose woods these are I think I know….”  (Frost), or, “They fuck you up, your Mum and Dad…..”  (Larkin).

As you read these examples, think about how the opening lines bring us into the poem, how they set the stage for what follows, and how starting elsewhere or otherwise would have changed the poem.  You could do the same thing with last week’s poems, or for that matter, any poems you find on the blog, or on your own bookshelves.  Feel free to post some of your own favorite first lines here, with or without the poems they’re from.  We’ll of course discuss these at this week’s Fridays at 4 (eastern time).  I’ll send the link on Friday morning.

Seems like a long time
Since the waiter took my order.
Grimy little luncheonette,
The snow falling outside.

Seems like it has grown darker
Since I last heard the kitchen door
Behind my back
Since I last noticed
Anyone pass on the street.

A glass of ice-water
Keeps me company
At this table I chose myself
Upon entering.

And a longing,
Incredible longing
To eavesdrop
On the conversation
Of cooks.

Axes
After whose stroke the wood rings,
And the echoes!
Echoes traveling
Off from the center like horses.

That drops and turns,
A white skull,
Eaten by weedy greens.
Years later I
Encounter them on the road-

Words dry and riderless,
The indefatigable hoof-taps.
While
From the bottom of the pool, fixed stars
Govern a life.

WIND IN A BOX

This ink. This name. This blood.  This blunder.
This blood. This loss. This lonesome wind. This canyon.
This / twin / swiftly / paddling / shadow blooming
an inch above the carpet–. This cry. This mud.
This shudder. This is where I stood: by the bed,
by the door, by the window, in the night / in the night.
How deep, how often / must a woman be touched?
How deep, how often have I been touched?
On the bone, on the shoulder, on the brow, on the knuckle:
Touch like a last name, touch like a wet match.
Touch like an empty shoe and an empty shoe, sweet
and incomprehensible. This ink. This body in a box. This blood
in the body. This wind in the blood.

Lana Turner has collapsed!
I was trotting along and suddenly
it started raining and snowing
and you said it was hailing
but hailing hits you on the head
hard so it was really snowing and
raining and I was in such a hurry
to meet you but the traffic
was acting exactly like the sky
and suddenly I see a headline
lana turner has collapsed!
there is no snow in Hollywood
there is no rain in California
I have been to lots of parties
and acted perfectly disgraceful
but I never actually collapsed
oh Lana Turner we love you get up

My mother died one summer—
the wettest in the records of the state.
Crops rotted in the west.
Checked tablecloths dissolved in back gardens.
Empty deck chairs collected rain.
As I took my way to her
through traffic, through lilacs dripping blackly
behind houses
and on curbsides, to pay her
the last tribute of a daughter, I thought of something
I remembered
I heard once, that the body is, or is
said to be, almost all
water and as I turned southward, that ours is
a city of it,
one in which
every single day the elements begin
a journey towards each other that will never,
given our weather,
fail—
the ocean visible in the edges cut by it,
cloud color reaching into air,
the Liffey storing one and summoning the other,
salt greeting the lack of it at the North Wall and,
as if that wasn’t enough, all of it
ending up almost every evening
inside our speech—
coast canal ocean river stream and now
mother and I drove on and although
the mind is unreliable in grief, at
the next cloudburst it almost seemed
they could be shades of each other,
the way the body is
of every one of them and now
they were on the move again—fog into mist,
mist into sea spray and both into the oily glaze
that lay on the railings of
the house she was dying in
as I went inside.

Shape and Structure in Poems