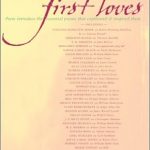 For the past few weeks we’ve talked about deep reading and allusion–heady stuff, and crucial.  This week I’d like to turn to the heart of poems, the emotions they set off in us.  And in particular, I want to hear about some of your earliest examples of that experience, whether they’re poems you still love or poems you’ve moved on from.  What follows is an earlier post I did on this topic, but it’s been a while, and it was before the Fridays at 4 (eastern time) zoom discussions.  Think back to poems (maybe even nursery rhymes) that gave you early glimmerings of the magic that words can create.

Sometimes I start a class with a book that takes me straight to the heart of wanting to write poetry: First Loves: Poets Introduce the Essential Poems that Captivated and Inspired Them, edited by Carmela Ciuraru (Scribners 2001). If you don’t already know it, I’d recommend the amazon page review for a sense of what it’s like. Ciuraru asked a wide range of contemporary poets to choose a poem that inspired them early on and say a few words about it. Every time I read around in the book I’m taken back to some of my own sources, and the same thing happens to students when they read it: a direct line opens to those original urges. The book is full of surprises: Robert Creeley chooses Alfred Noyes’s “The Highwayman” and Wanda Coleman picks Lewis Carroll’s “Jabberwocky,” for example.

A number of experiences made me fall in love with words: my father asking “What’s black and white and red all over?” I was stumped. “A newspaper.” What? Oh! Read! That language could do that. Or my grandmother writing out “Mairzy doats and dozy doats and little lambsy divey” after she’d sung it. Later it was Poe’s “Annabel Lee” and—like Creeley—the galloping “Highwayman.” But it was Frost’s ability to see through tranquil surfaces to the depths below that resonated with something in me, from the opening of “My November Guest” (“My sorrow, when she’s here with me/ Thinks these dark days of autumn rain/ Are beautiful as days can be….”) to the horrifying “Out, Out—,” where a young boy is mortally wounded as he’s sawing lumber. But one in particular seemed to speak directly to me, where I lived in Utah’s arid landscape:

Snow falling and night falling fast, oh, fast
In a field I looked into going past,
And the ground almost covered smooth in snow,
But a few weeds and stubble showing last.

The woods around it have it – it is theirs.
All animals are smothered in their lairs.
I am too absent-spirited to count;
The loneliness includes me unawares.

And lonely as it is, that loneliness
Will be more lonely ere it will be less –
A blanker whiteness of benighted snow
With no expression, nothing to express.

They cannot scare me with their empty spaces
Between stars – on stars where no human race is.
I have it in me so much nearer home
To scare myself with my own desert places.

I’m curious to hear about your first loves. Please post your own examples and the reasons you chose them here, and join us for this week’s Fridays at 4 (eastern time) reading and discussion.  I’ll send the zoom link on Thursday.