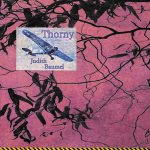 This week’s post is a continuation of our last discussion about allusion in poetry.  Each poet’s imagination is a world of its own, and poems are public translations of pieces of that world.  The questions  that always comes up with reading poems, whether in a workshop or on the page, have to do with the writer needs to put on the page for it to be a successful poem, and what are a reader’s responsibilities when it comes to meeting the poem itself at least halfway.

Some very interesting points came up in last week’s Fridays at 4 discussion, and we have a perfect chance to continue that this week with guest Judith Baumel, who will read from her new book Thorny, just out from Arrowsmith Press.  Since you won’t have had a chance to read the book, I’m going to provide a little context from the publisher’s description: “Walt Whitman Award winner Judith Baumel’s latest collection of poems, Thorny, is a fearless and poignant book connecting political displacement with personal and generational loss.”  And: “The first section is a set of strolls (‘passeggiate’) with characters from classical pastoral poems reborn as contemporary Sicilians and Bronxites….The middle section, ‘The American Cousins A-Z,’ is an experimental fugue of Jewish women’s voices, post-Holocaust, lamenting, remembering and forgetting….’Bound,’ the last section, is an intensely personal consideration of family and loss.”

The three poems here come from each of those sections, in order–first, second, third.  I’d suggest that you read them several times, including out loud, before you look up anything.  Make notes as you do, about your responses and your questions.  Wring everything you can out of it. Then look up anything you think will be helpful–words, historical references, pastoral poems. The poet reading on youtube.  And make notes again.  Then go back and just read again, with that information in hand.

As always–please comment here, and plan to join us for this week’s Fridays at 4 (eastern time) with guest poet Judith Baumel.

I drive from east to west from work to rest
from suburb to suburb across the Throgs Neck Bridge
as the sun drops in Throgmorton’s Colony,
The Frog, its little islands swallowed in swells,
the Lighthouse dark. So daily end my days.

You mean the battleground where General Howe
escaped Hand’s Riflemen and Glover’s band
but barely. Tactic: bring to ruin and make
of all the troops a human waste when the
negotiations of September Eleventh failed.

I mean that while the jets roared low and lower,
the sirens streamed past and I was stopped,
stopped by incurious reservists, weapons
slung behind, a checkpoint in suspension,
I tried to call you from the road, the sun bearing down.
I wanted to ask another way to go, to ask
from what I was fleeing, to ask toward what.

I would have said—Friend, stay the troubled night.
I have ripe apples, mealy chestnuts, pressed cheese.
Look left the shadows lengthen out and fall
where smoke rises–powder of computers,
asbestos, concrete, paper, a Parcaean air.

But on the right in the Sound the lozenge boats,
their sails rolled up, were scattered brilliant white
like a vial of Ambien spilled on navy silk
that I could gather to my pockets, one
bitter fact dissolving under my tongue

from The American Cousins A-Z

We built with bitumen and brick hard
but simple walls. We had enough
straw. Then they sent us out
to the Bitumen Valley and
it was bad. We were too many
Yekkes and Sepharads and gesture
did not cut through the rumors of
people lost in mountain passes,
others setting out in dinghies
to sweltering islands. It wasn’t
the words of our mouths but the foods
of our talk that were alien
one to the other. Nothing
human, etc. yet
our stomachs turned with kishkes
and rote grutze and fasoulia,
their recipes thrown up and standing
in for what we’d lost.
Long treks ended for the lucky
in this land of pizza. Looking upwards
was our first and biggest mistake
but staying where we landed close
to dust brought us to bitter dust.

The hair of the dog? Mementos?
What has been? What will be?
The bottle’s got wine, the glass does too.
Plenty of mistakes we see coming
and can’t stop, won’t stop.
Of this painting, Professor Boggs taught
the shape of the whole mirrors the shapes
of the parts. The rhythms of my teachers
fundamentally, irrevocably, hysterically,
adverbially shaped me: bronzed, breezy,
a shade too ruddy. That’s Robert Lowell
in “Terminal Days at Beverly Farms.”
Lowell’s drinker is killing time—there’s nothing
else, he says at first, but thirty-four lines later
asks, Is he killing time?
Each week Lowell pushed through the crowd
on Mass Ave toward Leavitt & Peirce
for his cigarettes before the bone-crushing surge
we created, converging on the seminar room
in Holyoke Center. A high floor between the infirmary
and those sun-ruined Rothkos in the Corporation’s
dining room. Thirty-plus years later I can’t
determine how the hangover went after my college
flirtation—the scotch—went down. I remember
the acquired taste of acquiring it.
Now a hangover is about time:
operational time and Poincaré’s time,
imprints, pentimenti, cyclical returns,
somatic memory, the way wine brings
the taste of its own history, earth and sun
and casks and the memory
of successive samples, the way
the smell and the pour bring distant ghosts
forward to the spilled circle, bring regret
and promises to bear against the future
as if it were the moment before
some car smashes through the walls
of this café, as if a parking meter outside
were ever clicking down to zero time.
As if, perhaps, the future just proceeds
upon the street, the cold of April rain
on the rangy disappointments of forsythia.