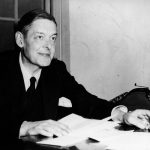 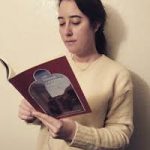 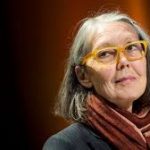 Sometimes reading poems deeply requires not just repeated readings, but looking up information off the page: unfamiliar words, words in another language, historical references, classical mythology, references to other cultures and practices.  It’s not just a matter of learning more of a poem’s context, but understanding a poem’s basic terms.  The first examples that come to mind are T. S. Eliot and Ezra Pound, but there are endless examples, past and present.  The three poems below all required some looking up for me to follow them. This is a kind of warm-up for next week, when we’ll be joined by poet Judith Baumel, who will read and discuss poems from her new book, Thorny–poems full of allusion.  This is a chance for us to talk about the relationship between poem and reader, and what they each need to do to meet on common ground.  What does a poem need to do to make us curious enough to learn its vocabulary?  What do we need to do to meet it on its own terms?

I hope you’ll add your own examples here, and bring them to this week’s Fridays at 4 (eastern time).   As always, I’ll send the zoom link on Friday morning.

The opening of The Waste Land
T. S. Eliot

April is the cruellest month, breeding
Lilacs out of the dead land, mixing
Memory and desire, stirring
Dull roots with spring rain.
Winter kept us warm, covering
Earth in forgetful snow, feeding
A little life with dried tubers.
Summer surprised us, coming over the Starnbergersee
With a shower of rain; we stopped in the colonnade,
And went on in sunlight, into the Hofgarten,
And drank coffee, and talked for an hour.
Bin gar keine Russin, stamm’ aus Litauen, echt deutsch.
And when we were children, staying at the arch-duke’s,
My cousin’s, he took me out on a sled,
And I was frightened. He said, Marie,
Marie, hold on tight. And down we went.
In the mountains, there you feel free.
I read, much of the night, and go south in the winter.

What are the roots that clutch, what branches grow
Out of this stony rubbish? Son of man,
You cannot say, or guess, for you know only
A heap of broken images, where the sun beats,
And the dead tree gives no shelter, the cricket no relief,
And the dry stone no sound of water. Only
There is shadow under this red rock,
(Come in under the shadow of this red rock),
And I will show you something different from either
Your shadow at morning striding behind you
Or your shadow at evening rising to meet you;
I will show you fear in a handful of dust.

“You gave me hyacinths first a year ago;
“They called me the hyacinth girl.”
—Yet when we came back, late, from the Hyacinth garden,
Your arms full, and your hair wet, I could not
Speak, and my eyes failed, I was neither
Living nor dead, and I knew nothing,
Looking into the heart of light, the silence.
Oed’ und leer das Meer.

BOOK OF ISAIAH, Part I

Lapping at Isaiah’s ears black birdsong no it was anger.

Once God and Isaiah were friends.

God and Isaiah used to converse nightly, Isaiah would rush into the garden.

They conversed under the Branch, night streamed down.

From the sole of the foot to the head God would make Isaiah ring.

Isaiah had loved God and now his love was turned to pain.

Isaiah wanted a name for the pain, he called it sin.

Now Isaiah was a man who believed he was a nation.

Isaiah called the nation Judah and the sin Judah’s condition.

Isaiah and God saw things differently, I can only tell you their actions.

The nation stirred in its husk and slept again.

Two slabs of bloody meat lay folded on its eyes like wings.

Who can invent a new fear?

Yet I have invented sin, thought Isaiah, running his hand over the knobs.

And then, because of a great attraction between them—

From beneath its meat wings the nation listened.

I cannot hear you, Isaiah spoke again under the Branch.

God smashed Isaiah like glass through every socket of his nation.

Isaiah is a small man, said Isaiah, but no liar.

And so that was their contract.

Brittle on both sides, no lying.

Isaiah’s wife came to the doorway, the doorposts had moved.

The fear of the Lord, said Isaiah.

He grinned in the dark, she went back inside.