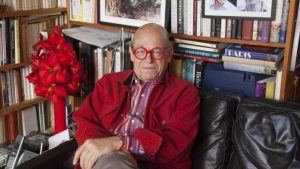 RICHARD HOWARD was a towering figure (one of his favorite words) in American literature, from his own poems to his insightful, wide-ranging essays on American poets (see Alone with America and Preferences: 51 American poets choose poems from their own work & from the past), to his numerous translations of French poetry and prose (Baudelaire’s Les Fleurs du Mal is one of the best known).

He also cut a figure, in his round glasses and red shoes.  Everyone who met him has vivid impressions of him, and stories that feature his erudition, his wit, and his generosity.  He taught in writing programs at Columbia, at the University of Houston, and the University of Utah.  He didn’t teach workshops, but gave lectures  on campus and invited students to his home for conferences.  He was a true mentor, publishing their work and supporting their careers.

I don’t remember when I first met Richard, but I do remember feeling nervous and intimidated.  He immediately put me at ease–something he must have had to do often throughout his life as he moved among people whose minds were not filled with what one writer describes as the equivalent The Great Library of Alexandria.  He wrote a blurb for a book of essays I edited, Where We Stand: Women Poets on Literary Tradition, and took part in a translation conference I helped organize.  When I taught for a semester at the University of Houston, I stayed in his apartment there while he was in New York.  Much of it was his favorite color, red–the telephone, a table, a chair, plates, cups, pillows.  Ever since then I find myself sprinkling smaller amounts of red through my rooms–I think of it as Richard Red.

Here are just two poems of his–neither one of them the long dramatic monologue he was famous for.  You can find those easily online.  This week’s Fridays at 4 (eastern time) discussion will be devoted to Richard Howard–his work, stories about him.  I’ve invited a few guests, and I hope you’ll bring your own.  I’ll be sending the zoom link on Friday morning.

Secret they are, sealed, annealed, and brainless
And solitary as Dickens said, but
They have something to say: that there is more
Than one way to yield. The first—and the hardest.
The most nearly hindered—is when you pull
Them off the rocks, a stinking, sawing sedge
Sucking them back under the black mud, full
Of hermit crabs and their borrowed snailshells,
Minnows scattering like superstitions,
The surf dragging, and every power
Life permits them holding out, holding on
For dear life. Sometimes the stones give way first.
Before they will, but still we gather them,
Even if our hands are bloody as meat,
For a lunch Queen Victoria preferred:
“A barrel of Wellfleet oysters, points down”
Could last across the ocean, all the way
To Windsor, wakening a widow’s taste.
We ate them this afternoon, out of their
Armor that was formidably grooved, though
It proved our own reversal wiser still:
Keep the bones and stones inside, or never
Leave the sea. “He was a brave man,” Swift said,
“Who first eat one.” Even now, precedent
Of centuries is not always enough.
Driving the knife into muscles that mould
The valves so close to being impartial.
Surrender, when it comes—and it must come:
Lavish after that first grudging release
Back there in the sea, the giving over
Of despair, this time—makes me speculate.
Like Oscar and oysters, I feel “always
Slightly immortal when in the sea”: what
Happens now we are out? Is the risk worth
While for a potential pearl? No, what we’re
Really after is the moment of release,
The turn and tear of the blade that tightens,
Tortures, ultimately tells. When you spread
The shells, something always sticks to the wrong
One, and a few drops of liquor dribble
Into the sand. Scrape it off: in the full
Half, as well as a Fautrier, a Zen
Garden, and the smell of herring brine that
Ferenczi said we remember from the womb,
Lunch is served, in shiny stoneware sockets,
Blue milk in the sea’s filthiest cup. More
Easily an emblem for the inner man
Than dinner, sundered, for the stomach. We
Take them queasily, wonder as we gulp
When it is—then, now, tomorrow—they’re dead

When we consider the stars
(what else can we do with them?) and even
recognize among them sidereal

father-figures (it was our
consideration that arranged them so),
they will always outshine us, for we change.

When we behold the water
(which cannot be held, for it keeps turning
into itself), that is how we would move-

but water overruns us.
And when we aspire to be clad in fire
(for who would not put on such apparel?)

the flames only pass us by —
it is a way they have of passing through.
But earth is another matter. Ask earth

to take us, the last mother —
one womb we may reassume. Yes indeed,
we can have the earth. Earth will have us.

Some useful links to check out:

You can find many readings, discussions, and interviews with Richard on specific topics, from his own poems to translations to other poets if you google and also look on youtube.

This is a lovely remembrance from The Paris Review, where Richard Howard was the poetry editor for a number of years:

This review-essay of his last book of poems, A Progressive Education, that appeared in the Los Angeles Review of Books, is by a former student of Richard’s.

Here’s a long interview with Richard Howard by the distinguished poet and scholar, J. D. McClatchy: