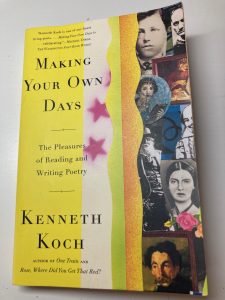 Sometimes you come across a book that gathers together bits and pieces that have floated through your mind and articulates them as a whole.  When I first read Kenneth Koch’s Making Your Own Days, it did just that, especially the first chapter, “The Two Languages.”

Those of us lucky enough to love poetry know many people who are baffled and maddened by it, who think of it as a puzzle they can’t solve.  My guess is that’s because they try to read it in the same way they would read prose, and when that fails they’re frustrated.  The language in poems looks familiar to them, but it doesn’t behave in the same way. Poetry feels like a foreign language to them, one they don’t read or speak.

According to Kenneth Koch, that’s exactly what poetry is, another language.  He writes about two languages, one prose and one poetry, in his book Making Your Own Days: The Pleasures of Reading and Writing Poetry. Koch then goes on to describe a number of characteristics that distinguish  the language of poetry, beginning with its music and including its dense use of imagery and rhetorical devices.

One day when I was talking to the poet Joan Houlihan, I discovered that Koch’s “Two Languages” had spoken to her as much as it had to me.  I’ve invited her to this week’s Fridays at 4 (eastern time) to discuss the concept with me–and with you.   Here are a few passages from it to entice you.  I’m attaching a pdf file of the chapter to the mailing you’ll receive.

Here are some points that spoke to me, with boldface for my favorites.

A poet could be described as someone who writes in the language of poetry.

Since its unknowable beginnings, language has become mainly a vast, reasonable, practical enterprise, with vocabulary and syntax and grammar to enable you to say almost anything you wish.  The part the “almost” applies to is what can be said only by poetry.

The poetry language is used by persons who have things (known to them or not known) that they need to say, and who are moved by this need and by a delight in making music out of words.

Given such a medium [the language of poetry], it is hard to imagine not wanting to play with it, to experiment to see what might be said with it, to take its powers into one’s own hands.  Bringing out its music is the first step in doing this.

Language is without any impediment to saying things that are not true.

Here’s the link for this week’s Fridays at 4, March 25th: