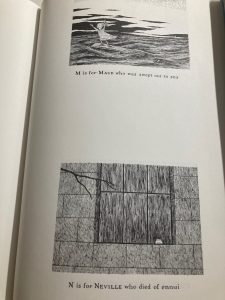 I’ve seen some posts online this week railing against jokes about the Russian invasion of Ukraine and the possibility of WW III.  Those telling these jokes include Ukrainian citizens and President Zelensky, and I’m with them– humor is an essential human survival tool, important in good times and crucial in terrible times.  Humor in poetry ranges from playful limericks to dark humor that reflects the absurdity of what it is to be mortal, to live our lives in the shadow of the knowledge that we’re going to die.  I need it all, from the belly laughs to the winces–from distraction to painful insight.

The first poem, by Ogden Nash, is a terrible earworm for me–almost any time my phone rings I think, “if it’s a panther/ don’t anther.”  Maybe by including it here I can pass it along to you.  I think I’ve posted “What a Friend We Have in Cheeses” before–it cracks me up every time.  Read it aloud, preferably with others.  James Tate is one of my favorite poets, has been from the beginning.  Just reading through his poem titles will make you laugh.  Charles Simic won the Pulitzer Prize in 1989 for his book of prose poems, The World Doesn’t End.  He was a child in Yugoslavia during WW II, so he comes by his sense of the absurd naturally.  I highly recommend his prose memoir in Wonderful Words, Silent Truth.   Edward Gorey was a brilliant artist, author, and eccentric, whose dark humor appeals to me.  Margaret Atwood’s first books were poetry.  The poem here is from Power Politics.

The panther is like a leopard,
Except it hasn’t been peppered.
Should you behold a panther crouch,
Prepare to say Ouch.
Better yet, if called by a panther,
Don’t anther.

What a Friend We Have in Cheeses! or Sing a Song of Liederkranz

Poets have been mysteriously silent on the subject of cheese.
G. K. Chesterton

What a friend we have in cheeses!
For no food more subtly pleases,
Nor plays so grand a gastronomic part;
Cheese imported — not domestic —
For we all get indigestic
From the pasteurizer’s Kraft and sodden art.

No poem we shall ever see is
Quite as lovely as a Brie is,
For ” the queen of cheese ” is what they call the Brie;
If you pay sufficient money
You will get one nice and runny,
And you’ll understand what foods these morsels be!

How we covet all the skills it
Takes in making Chevre or Tilset,
But if getting basic Pot Cheese is your aim,
Take some simple curds and wheys, a
Bit of rennet — Lo! you’ve Käse!
(Which is what, in German, is a cheese’s name.)

Good lasagna, it’s a-gotta
Mozzarella and Ricotta
And a lotta freshly grated Parmesan;
With the latter any pasta
Will be eaten up much faster,
For with Parmesan an added charm is on.

Ask Ignacio Silone
What he thinks of Provolone,
And the very word will set his eyes a flame;
Then go ask the bounteous Gina
Her reaction to Fontina —
If you’ll raise your eyes you’ll see she feels the same.

A Pont-l’Evêque au point! What ho!
How our juices all will flow!
But don’t touch a Pont-l’Evêque beyond that stage,
For what you’ll have, you’ll surely find
Is just an over-fragrant rind —
There’s no benefit to this fromage from age.

Claret, dear, not Coca Cola,
When you’re having Gorgonzola —
Be particular to serve the proper wines;
Likewise pick a Beaune, not Coke for
Pointing up a Bleu or Roquefort —
Bless the products of the bovines and the vines!

And we all know that ” Say cheese ” is
How a cameraman unfreezes
A subject in a stiff, or shy, or dour way;
There’s no other food so useful,
So bring on a whole cabooseful
Of the stuff of life! The cheeses of the gourmet!

Thinking Ahead to Possible Options and a Worst-Case Scenario

I swerved to avoid hitting a squirrel
in the center of the road and that’s when
the deer came charging out of the forest
and forced me to hit the brakes for all I
was worth and I careened back to the other
side of the road just as a skunk came toddling
out of Mrs. Bancroft’s front yard and I swung
back perhaps just grazing it a bit. I glanced
quickly in the rearview mirror and in that
instant a groundhog waddled from the side
of the road and I zigzagged madly and don’t
know if I nipped it or not because up ahead I
could see a coyote stalking the Collier’s
cat. Oh well, I said, and drove the rest
of the way home without incident.

K is for Kate, who was struck with an axe
L is for Leo, who swallowed some tacks
M is for Maud who was swept out to sea
N is for Neville who died of ennui….

you fit into me
like a hook into an eye

a fish hook
an open eye