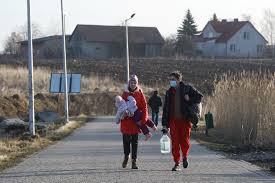 Not surprisingly, the terrible destruction in Ukraine is on my mind right now, a bloody livestream in my head and heart as I go about my safe, ordinary life here–feeding my cats, doing the laundry, shopping for groceries, going for a walk.  I was at one extraordinary event, a reading via zoom earlier in the week, with Ukrainian poets and their English translators–and 850 people there to watch and listen.  There was, not surprisingly, a lot of weeping, and some of mine was for the gift of being in that group, sharing the grief and the beauty.

With Ukrainian citizens arming themselves and joining the fight, it’s hard to draw a clean line between them and designated soldiers, but I’ve when I read any battle story I’m drawn to the lives of civilians, the impact of war on them.  It only occurred to me today that might be because I am one of those affected civilians.  I was born during World War II, and my father was away in the South Pacific for the first three years of my life–something that shaped my childhood and has left ripples through my adult life.  My family didn’t suffer any of the horrendous effects of having war on their home ground, but they were affected by it nonetheless. Wars touch everyone in some way.  Those of us who write poems have to find our own vantage points, what only we can say about the unfolding events.

The poems I’m posting here today are set not in the Ukraine, but in Syria.  They’re by the Syrian-American poet Seif-Eldeine, who received a degree in Middle Eastern Studies from Tufts University and an MFA in Poetry from Lesley University.  His poems have appeared in The Massachusetts Review, and Qu, and are forthcoming in The Michigan Quarterly Review and Chestnut Review.  “Yara’s Grandfather’s Garden” appears in the most recent issue of Pedestal.

I hope you will post your favorite civilians-in-wartime poems here.  My own is probably the scene in Book VI of the Iliad,, where Hector is spirited back to his home, to his wife and child, just before he returns to the battlefield where he’ll be slain by Achilles.  When Hector reaches for his infant son, the boy screams, terrified by the feathers in his father’s helmet, and Hector laughs, takes it off, and sets it on the ground.  That moment is surrounded by brutal violence, including the coming murders of Hector and his son, and the rape and captivity of Andromache, the wife and mother.  The juxtaposition is piercing.  So are Seif-Eldeine’s poems:

Yara knows what type of weapon the soldiers use
just from the sound of it. She paints
the flowers she remembers in her grandfather’s garden:
lilacs, pecked at by hummingbirds
like vultures pick at dead bodies
red roses, like the soldier
who coughs up blood from the smoke
in the scorched wheat fields of Hama
and jasmines, white like the helmets
of the men who come to save
the children from the war.
Everything is strange and blurry
now that Yara lost her glasses
after the roof collapsed on them. Her paintings
look like Van Gogh’s: blue, spotty
and Impressionistic.  She used to be scared of rain
but now it seems such a silly thing
to be scared of.  Her eyes are inflamed
and every night her nose bleeds.
She needs to see a doctor
but the government bombs the triage
near her house. In a night without a moon,
the power went off. Then, Yara heard the explosions.
Unable to see,  Yara heard the screams
get louder and louder. She waited her turn
before her family fled  to her grandfather’s house.
There, they found refuge and the power
came back on. Yara rubbed her eyes
to try to make out the flowers
in her grandfather’s garden. But they looked
so different now, distorted, grotesque.
They looked like the faces she imagined
belonged to the screams she heard.

I am leaving my house, which still smells
like the latrine it used to be. Half
woman, half-trauma, I do not attend a job
or classes at my pharmacy school,
just dirt and tents stamped blue
“U.N.C.H.R.” by the U.N. aid
workers. The stamps remind me
we’re not yet a people again.
The atmosphere chews up a comet.

I hear my neighbors beat a bendir drum.
Its skin is as flat as the desert
on which our camp sits.
Walking sticks hit the ground
as the other refugees on the street
celebrate my wedding with me.  I wear white
plastic daisies in my hair, and my tears
feel plastic as they capture a sliver
of light from the sun. Today is about this,
trying to capture sunlight in a tear.

I wish my father were here to put
his hands together and clap as I dance.
I wish my father were here to cup
a butterfly in his hands,  to make this
makeshift courtyard into a dancehall,
Kazem-Al Saher singing love songs from
the boombox. Isn’t this the day I’ve been
waiting for? Isn’t a bride supposed to be lit
by fireflies and explode from happiness?
All those days of pain march behind me
like the government security forces
who came to take my father away.
Why didn’t I fight them back?
I think of A’isha, the Prophet’s wife,
and how she rode into battle
without fear, to avenge
the Caliph’s death.

Blue Opel Taxi, take me close
yet far. My fiancé hangs by my side.
I step out of the taxi,
the only car in sight, and see
an origami heart placed
in a discarded Fanta bottle.
I am unfolding. My fiancé’s
hands fold me back together
and I am a swan. My fiancé
has my father’s hands.

Look how he strokes
his young cousin’s ruddy cheeks
as we stand outside his house.
Look how he picks up the sand
and tastes it like he is tracking an animal.
Feel how the wind whispers our wedding vows.
With no sheikh, we are only what Allah allows.

King or Queen for a Day

My daughter, Fatima, prefers
our homely throne to anything else.
It is simple: wood, a white cotton cover,
and no arm rests. She also made
a scepter from our toilet paper tubes.
My other, Nina, cries for meat
when she is not the Queen.

On days I am King, I give up
my lamb to my children.
Their empty stomachs growl like a wolf.
The rain that comes in from our roof
tastes like a first kiss. Children play
in a water-filled bomb crater.
They smile and for a moment
the war disappears, and the water cools
all the hate the children have learned.

Nina is Queen today. For the first time
she decided to share her food.
She made me her court’s jester,
so I dance and trip and fall on myself
to make the children laugh.
My wife is in the kitchen,
turning sour tomatoes into a paste.
Sick of its taste, Mo, my son,
refuses to eat it. He’d rather go hungry.
I hunger for something other than food.

I hunger for my wife’s touch, but the kids
and this small apartment
do not allow it. I look at her across the room.
She does not return my gaze. It’s like
a glass wall stands between us.
We can see each other through the glass,
and lift our hands as we mirror
each other’s skin, the journal
that records the soldiers’ crimes.

Seif-Eldeine will also join me for this week’s Friday’s at 4 (eastern time) session, and I invite the rest of you to bring poems to read.

Sharon Bryan is inviting you to a scheduled Zoom meeting.

Who Says? Who Sees?