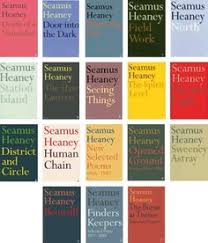 I was very pleased with the first Fridays at 4 gathering.  It was great to see so many familiar faces and hear all that passion for poetry.  We certainly mentioned Heaney, and the documentary The Music of What Happens, but we didn’t actually look at any specific poems.  I’d like to do more of that this coming Friday with a specific focus: reading as a reader, and reading as a writer.  Obviously those two overlap for those of us who write poetry, but I think there are big differences between the two.  When I’m reading a poem through my writer’s eye I’m reading selfishly, looking at how it’s made. I take in the content, of course, and am moved by it.  But often it’s the craft that’s in the foreground for me–how the poem transitions from one point to another, and travels down the page; where it shifts verb tense or point of view; how it moves around in time;  how it uses white space.  I think about how the poem might have begun for the poet, and about the choices he or she made, how it might have been done differently.

Here’s the program for  the March 4th Fridays at 4 (eastern time) conversation. I’ve invited Jay Parini to join me to discuss two poems by Seamus Heaney, “Midterm” and “Exposure,” through the lenses of reader and writer.  Jay Parini is a poet, novelist, and biographer.  His most recent books are New and Collected Poems: 1975-2015; and Borges and Me: An Encounter.

And here are the two poems we thought to start the reader/writer dialogue with, “Midterm” and “Exposure.”  Jay and I will discuss them first with each other, and then open the conversation.  Feel free to bring favorite Heaney poems to read and refer to, and to bring your friends–just no zoom bombers.  I’ll send the link later in the week.

In the meantime, please go ahead and comment here on the two poems.  If you have any questions, feel free to email me.

I sat all morning in the college sick bay

At two o’clock our neighbours drove me home.

In the porch I met my father crying—

He had always taken funerals in his stride—

And Big Jim Evans saying it was a hard blow.

The baby cooed and laughed and rocked the pram

When I came in, and I was embarrassed

By old men standing up to shake my hand

And tell me they were ‘sorry for my trouble’.

Whispers informed strangers I was the eldest,

Away at school, as my mother held my hand

In hers and coughed out angry tearless sighs.

At ten o’clock the ambulance arrived

With the corpse, stanched and bandaged by the nurses.

Next morning I went up into the room. Snowdrops

And candles soothed the bedside; I saw him

For the first time in six weeks. Paler now,

Wearing a poppy bruise on his left temple,

He lay in the four-foot box as in his cot.

No gaudy scars, the bumper knocked him clear.

A four-foot box, a foot for every year.

It is December in Wicklow:

The ash tree cold to look at.

A comet that was lost

Should be visible at sunset,

Those million tons of light

And I sometimes see a falling star.

If I could come on meteorite!

Instead I walk through damp leaves,

Husks, the spent flukes of autumn,

On some muddy compound,

Whirled for the desperate.

I often think of my friends’

And the anvil brains of some who hate me

As I sit weighing and weighing

For what? For the ear? For the people?

For what is said behind-backs?

Rain comes down through the alders,

Mutter about let-downs and erosions

And yet each drop recalls

I am neither internee nor informer;

Escaped from the massacre,

From bole and bark, feeling

Every wind that blows;

Who, blowing up these sparks

For their meagre heat, have missed

Poems You Changed Your Mind About