Seamus Heaney: The Music of What Happens 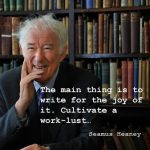 I want to recommend a beautiful documentary on the life and work of Irish poet Seamus Heaney.  It includes his wife, children, and brothers, and shows him on his various home grounds in Ireland.  Once you’ve heard him read his poems, you will forever hear that lilt and voice when you read them on the page.

He certainly studied the craft of poetry and read widely in the tradition he stepped into.  But he also had a gift that goes beyond anything that can be taught or learned.  The words and music poured out of him–as they did out of Paul McCartney in the Beatles documentary I just watched.

I was lucky enough to spend a little time in conversation with Heaney when he did a residency at a university were I was teaching.  I had just read his long poem “Station Island,” a visionary pilgrimage.  It had been prompted by his wrestling with what his responsibilities were as a poet during the Irish Troubles.  He was pressured to take on a more activist role, to be a spokesman, and criticized when he refused to do that.  It hit close to home–a cousin of his had been murdered.  At the climax of the long, arduous pilgrimage, the revelation Heaney received was an affirmation that he continue his lyrical poetry: “…The main thing is to write for the joy of it.  Cultivate a work lust….”  As a poet who often struggles to write, I longed to do just that.  I cut out those words and taped them over my desk.   When I told him how powerful I found them Heaney said, “I was a little disappointed.  I don’t know what I expected, but something bigger.”  I can’t imagine anything bigger.  Click here to watch Seamus Heaney: The Music of What Happens.

I Hear America Singing: The Poetry of American Identity