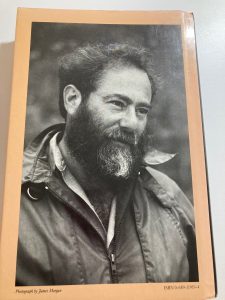 Marvin lived and breathed poetry. He published…well, I just tried to count how many books of poems, but I couldn’t quite, given collected and selected and hybrids.  The inside cover of the last book published during his lifetime, Incarnate: The Collected Dead Man Poems, lists 25 items under Also by Marvin Bell, including books of poems, a children’s book, two books of essays on poetry, letter poems written with William Stafford, collaborative poems with Christopher Merrill, collaborations with musicians, painters and photographs.  Poetry was his skin, his senses, the lens he saw the world through.

Marvin taught thousands of students, at the University of Iowa, Pacific University, and dozens of conferences and residencies around the country.  He taught in workshops and seminars, and he taught by the example of his own poems.  I learned how important it is to get words on the page without judging and censoring–just get them there.  I learned how to write a whole poem, not just pieces.

And then I had the good fortune to become friends with Marvin and Dorothy, friends for life.  For a few years we lived in the same town, another great gift.  Walks, lunches and dinners, all of them filled with stories, everything somehow connected to poetry.  His generosity was as much a part of him as his poetry.  When I started telling friends about Marvin’s illness a few months ago, everyone who had ever visited me in Port Townsend said, “Oh yeah, I met Marvin there.  He and Dorothy took us to lunch/ dinner/ on a tour of the town or the peninsula.  I still remember things he said.”  Of course they do, because Marvin was totally present in every moment–there, engaged, listening and talking.

He was also a rescuer.  Of students in despair, on the verge of suicide, broke, heartbroken, lost, on drugs, confused, in jail.  He kept me in grad school when I was about to leave.  When we were all in Port Townsend, Marvin and I were talking on the phone, my phone died.  Before I could plug it in to recharge it, he was pounding on my door to see if I was ok, Dorothy watching from their car window in the driveway.  When he came in I saw the baseball bat he was holding behind his back.

The thousands of people whose lives Marvin touched will all have their own Marvin stories, and I wish they could be gathered in one place–but it would take a much bigger book than Incarnate’s 325 pages, which he described as a doorstop. They’re endless, and I’ll post a few more here over time.  I hope some of you will add yours here.   And of course there’s no way to count all the people who never met him but have been moved by his work.

For now, here’s a poem of his I love–set in yet another piece of Marvin’s life, his time in the Army.  In one more example of his endless generosity, he gave it to me to publish in WaterTable, a magazine I did just one issue of before I realized I didn’t have the time or energy or money to keep doing it.  If Marvin had been editing it, it would still be going.

crawl toward the machine guns
except to freeze
for explosions and flares.
It was still ninety degrees
at night in North Carolina,
August, rain and all.
The tracer bullets wanted
our asses, which we swore to keep
down, and the highlight
of this preposterous exercise
was finding myself in mud
and water during flares. I
hurried in the darkness–
over things and under things–
to reach the next black pool
in time, and once
I lay in the cool salve that
so suited all I had become
for two light-ups of the sky.
I took one inside and one
face of two watches I ruined
doing things like that,
and made a watch that works.
From the combat
infiltration course and
common sense, I made a man
to survive the Army, which means
that I made a man to survive
being a man.

Here are some links to more Marvin stuff:

tribute from his friend David Hamilton:

tribute from Christopher Merrill, his friend and collaborator:

Review of Incarnate: The Complete Dead Man Poems.  Marvin said, incredulously, “It sounds like he read every one of them.”:

celebratory reading of Marvin’s work sponsored by Prairie Lights Bookstore, with stories of his life, him reading at the end: